Why toxic parenting shouldn’t be put under the rug?

“Unloving in the name of love” 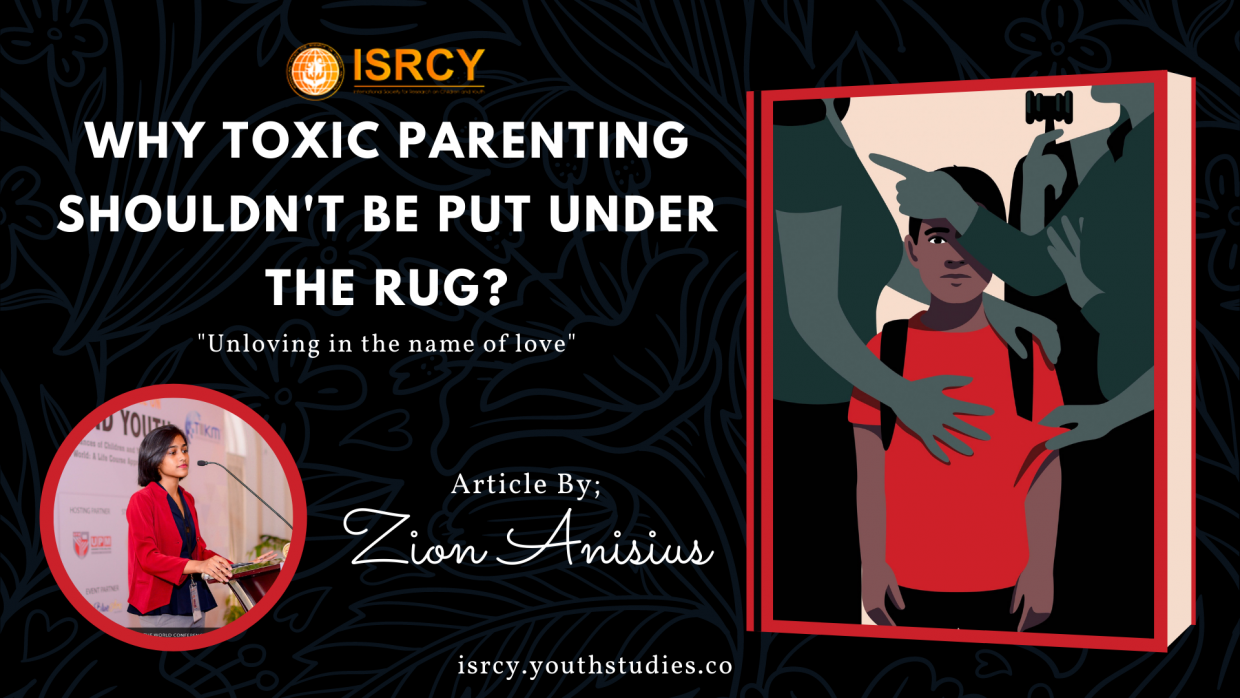 There’s both good parenting and bad parenting, while they say there are no perfect parents; where do we draw the line between “toxic parenting” and “‘acceptable parenting”?

There is no doubt that parents’ love and affection are necessitated for children to grow a positive outlook on the world. Children tend to rely on either mother or father or both the parents to help them comprehend the world as they grow up, but not every child is lucky enough to have a supportive stronghold promise of “I’ll be here” from their parents because some choose to show love defining to their own understanding and choices, we call it as “toxic parenting”- unloving in the name of love.

What is Toxic parenting?

In simple, Toxic parenting isn’t just a certain behavior that parents will choose to on and off, despite the caring and loving aura they showcase to others, the way they behave and react towards the child defines certain aspects of toxic parenting. Remember that toxic parenting is not the general yelling and shouting at children, but their impulse of wanting to take control over the child, recurring with the mindset “children owe us”

Abrupt changes in the behavior of the parents lead to the child being confused about how they are treated. Some days the parent would show emphatic, generous gestures the suddenly start yelling and bullying the child. They are likely to apologize or even admit to the fact that what they did was indeed wrong, but there’s still a thin line between them stopping the abuse, neglect will still be ongoing and keeps progressing throughout.

Most importantly during this stage, the child might start questioning love. Emotionally the child will be scared which can later lead to the risk of many developmental problems. It could be either both the parents or just one parent who exhibits certain characteristics.

Let’s countdown the most common characteristics of toxic parents;

Why is Toxic parenting a less forwarded topic?

The world defines parents as the mighty foundation of a child’s life. When children are exposed to the social norms of “parents will never mean harm us ” “all they do is to teach us what is right” etc…, this will fill the young brains so when they are in the understanding age of being exposed to toxicity, norms such as the above will hinder them from reaching out for help. Why? because we, the world have failed to give the children the freedom to their words. Certainly, some children grow up deeming the above characteristics are “normal” until they reach adolescence.

The effects and the future

“A parent’s lack of responsiveness, abandonment, betrayal of trust or inability to comfort and soothe the children in times of distress creates overtimes an attachment injury that is not easily healed” (Johnson, Makinen & Millikin, 2001)

Children who are repeatedly exposed to toxic parenting habits will ultimately grow up to have lower self-esteem and withdrawal symptoms from people, but in certain scenarios children will mirror the same neglect behaviors of the parent due to triggers.  Talking about “toxic parenting” shouldn’t be fabricated as “toxic”.

Tim Kimmel once stated that “fear-based parenting is the surest way to create intimidated children” and I add, “If you choose to look down on your child today, the world will have no say, it will do the same”.

Article by – A. Zion Anisius